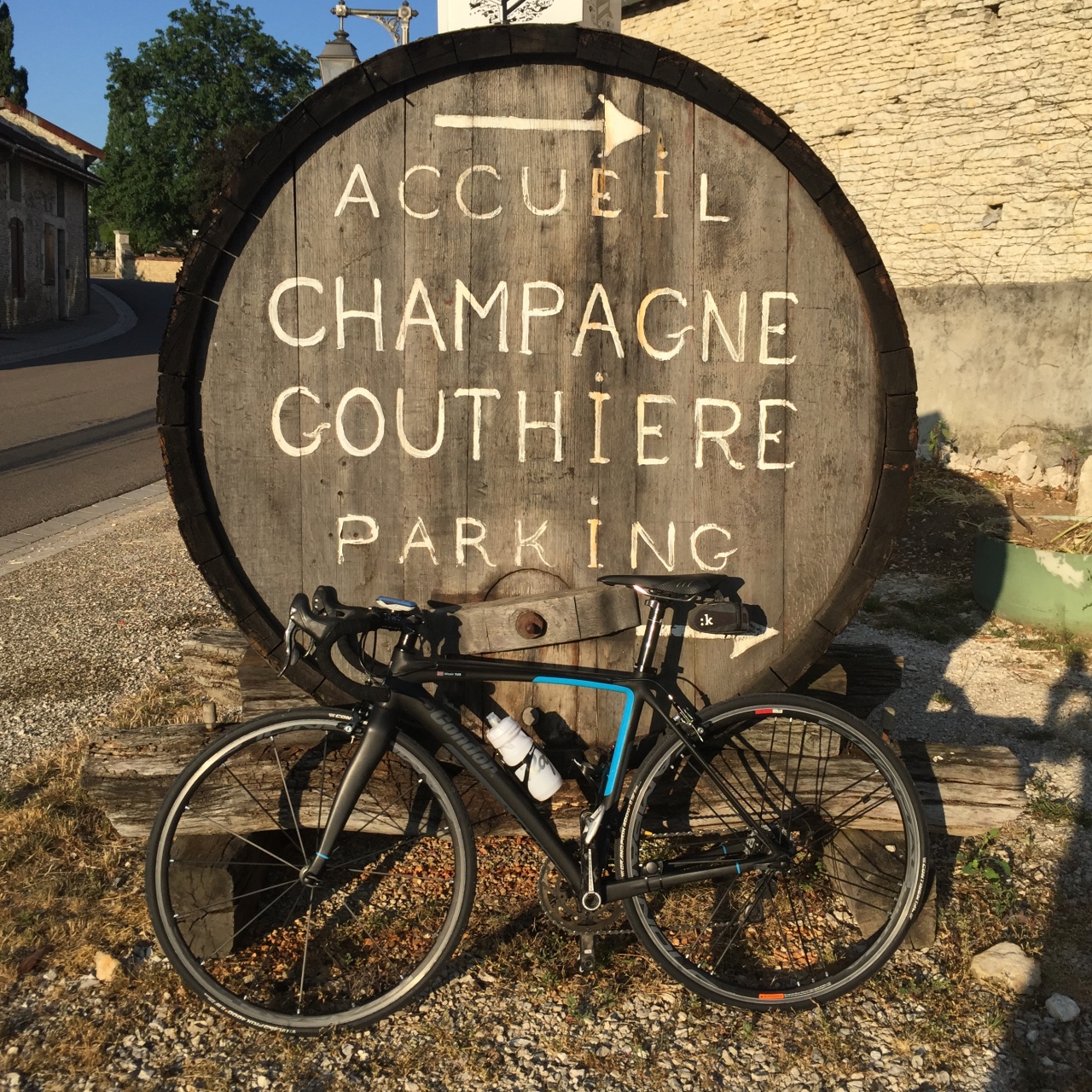 I was on the road to the big one, L’Etape du Tour and I was feeling good. I felt like I’d done as much training as I could and I’d had some rest. I’d also made a real effort to drop a few lbs, my mind was really positive.

We drove from our home in Bedfordshire, England to the Alps, a journey of 746 miles each way. To break up the journey we stopped half way in a beautiful converted Domaine in the Champagne region, Domaine Rennepont. The hosts Hanneke, Edward, Resi and Tim were wonderful and I think they’d like to keep Savannah, I think Savannah would like to stay. They had a young dog, George that she fondly renamed King George and they became best friends and she sang for them.

In the evening we drove to the local village Colombey-les-Deux-Eglises for dinner and the beauty of the roads immediately enchanted me. I was desperate to take my bike on them, they were well surfaced, quiet and rolling with the most beautiful views but there was something else drawing me out at 06:30 that morning.

Unbeknown to me, when I booked the accommodation the local village is also the burial place of Charles De Gaulle. It seemed so appropriate that I should pay my respects and visit his memorial. My Grandfather was a Navy Minesweeper in La France Libre, Free France, he was in the Normandy landings. I was heading to the mountains to ride the L’Etape du Tour in his memory. We only have limited information surrounding my Grandfather’s life during WW2, he was exposed to terrible things, great suffering and it’s a part of his life that he chose not to share in great detail. He did however meet my Grandmother in Devon while stationed in England so there is a twist in the tale that resulted in great happiness for him.

I rolled out of bed at 06:30 and kitted up, it was before breakfast so I ate my favourite pedal bites bar and packed another in my jersey just in case. The route was the same as we’d driven the night before, approximately 18km, a gentle spin with a draggy 4km climb of hairpins up through the woods, it was perfect, I was excited. As I cycled out of the house I remembered to stay on the right side of the road and I was immediately greeted with a beautiful sunrise. Riding along next to the fresh cut harvest in the morning sun was giving me a very happy feeling. I turned in to the woods, the lights went out and the climb was a lot more challenging that it looked from the car but really enjoyable with hairpin after hairpin on a wide and totally quiet road. As I reached the top the sun was blazing across the fields, the light was blinding and it felt like it rushed through my body and lifted my energy with it, I greeted it back with a big smile. The road ahead was long with another steady incline and I started racing ahead, the sun had a profound effect on me, it was filling me with cheer and great speed. In the distance I could see the giant cross, the Charles de Gaulle memorial standing proud on the hilltop and this was my destination.

My Grandfather joined Charles de Gaulle’s government-in-exile, Free France and its Free French Forces during the Second World War so I went there to ask for some extra strength and the courage to take on the mountains. This would be my first experience of riding real mountains and I was going to peak 5 in one day.

As I rode back through the village I felt happy I’d made the connection and I knew my Grandfather would’ve appreciated it. As I carried on my way my thoughts started turning to breakfast and seeing Savannah’s lovely smile. I raced along, smiling to myself past the fields of wheat that were now a hive of activity, combine harvesters were busy at work bringing in the crop. I rode along towards the wooded area and prepared myself for an enjoyable descent, still smiling from my moment at Charles’s memorial. I got down on the drops and started to power down because it was such a lovely piece of road, it deserved some effort. Just as I was really getting in to the descent from the corner of my eye I noticed a large bird, it flew out of the trees. It was a buzzard, it was moving really quickly, it flew across the road and out in front of my bike, it was huge, it was so close and for another few seconds it flew directly in front of my bike and then it flew up in to the sky and it was gone. My initial reaction was wow and then I thought about pulling over to check if that really happened then I realised how much I was smiling and I started riding even faster and enjoyed that descent even more feeling completely ready for the bigger ride ahead.